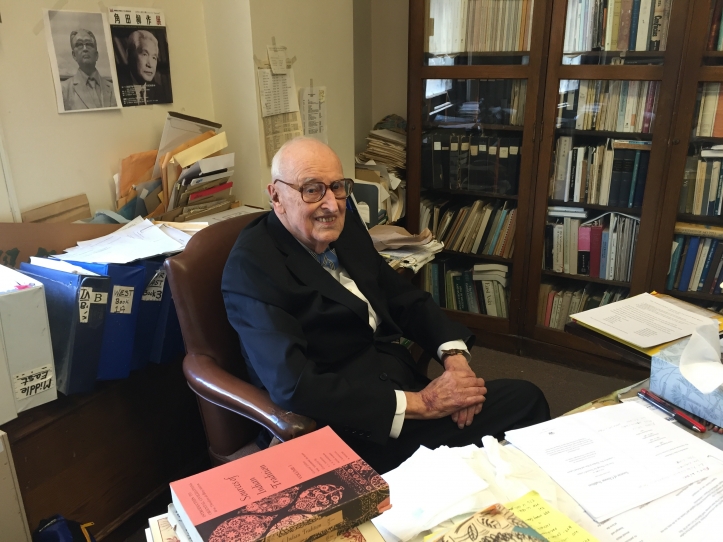 In a press conference from its office in Taiwan, the Tang Prize announced today (June 20) the 2016 Tang Prize in Sinology, which is the study of China and its related fields. William Theodore de Bary, Professor Emeritus of Columbia University, was named as the sole recipient this year “for his pioneering contributions in Confucian studies.”

The announcement was made by former Academia Sinica President and 1986 Nobel Laureate in Chemistry Yuan Tseh Lee. A table of experts in the field of Sinology, ranging from literature to history and linguistics, joined him to witness and speak on the accomplishments of Professor de Bary. This included Current Acting President of the Academia Sinica Wang Fan-sen, Academicians David Der-Wei Wang, Yusheng Lin, William S.-Y. Wang, Chin-shing Huang, and Research Fellow at the Academia Sinica Sher-shiueh Li. Tang Prize Foundation CEO Jenn-Chuan Chern delivered the opening remarks to the historical event.

David Der-Wei Wang, in his introduction to de Bary’s 70-plus-year career, noted that de Bary has been involved in the editing, writing, and translating of more than 100 classics and books of his own. His 1960 Sources of Chinese Tradition was cited by many of the experts present as a seminal and foundational work. This compilation of translations and annotations of Chinese classics has remained a mainstay of Sinological studies for over 50 years, and has offered a thorough portrayal of different aspects of the social, political, intellectual, and cultural traditions of China to students in the English-speaking world.

Wang also brought attention to de Bary’s role as a pioneer of Confucian studies in the West and in the world overall. “He has single handedly reinvigorated the thought, learning, and training of Confucian thought, particularly in the Cheng-Zhu school,” Wang said during the introduction. His work has brought Confucianism, an essential element of Chinese civilization, to the attention of the world, not only in its traditional sense, but in the modern and post-modern senses as well.

Another major theme that de Bary has written on at length is the Confucian emphasis on the individual and freedom. Throughout his works he has advocated that Confucianism is by no means an obstacle to modernization, on the contrary it is the core foundation of culture across East Asia. Chin-shing Huang corroborated on this point, saying that to understand these cultures, it is essential to understand the traditions out of which they were born. And, perhaps most important, one must study these cultures not with the analytical tools of the Western tradition. “Professor de Bary held that to understand Chinese culture, one ought to do so from the Chinese perspective,” said Huang.

Yusheng Lin, an historian of Chinese thought, added that de Bary has brought attention to the comparative aspects of development between the East and West. However different the systems of the East and West may seem, there are still many commonalities to recognize, and many differences from which each side can learn.

In addition to studying and writing on Confucianism, de Bary was also responsible for bringing the thought and traditions of Confucianism, Buddhism, Japanese culture, and Hinduism into the Core Curriculum at Columbia. This worldly approach is reflected in his career as a whole, in his encouraging of dialogue between different cultures as the best way to showcase the value of human rights of civil society and resolve key issues facing the world today.

David Der-Wei Wang ended by saying that throughout his career, de Bary has continued to “pursue the ultimate goal of the Confucian ideal, that is, the making of gentleman (junzi).” Over his long and illustrious career, as educator, writer, and provost of Columbia University, de Bary “has embodied the true spirit of Confucianism,” especially “our understanding of humanity and our understanding of world humanity,” added Wang.

Founded in 2012 by Samuel Yin, the Tang Prize awards achievements in four categories: Sustainable Development, Biopharmaceutical Science, Sinology, and Rule of Law. The newest round of awardees will be announced live streaming on June 18-21, 2016, and will receive the medal, diploma, and cash prize at the award ceremony on September 25 in Taipei.